This blog is from another one of my adventures at an airport. Traveling on an airplane is normally a very fast way to go from one place to another and usually the place that you are traveling to is one you want to get to so it is generally a pleasant experience, but not always. 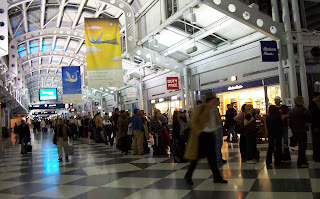 This picture on the left is one I took at the Chicago O'Hare airport back in January after a crazy day of flight cancellations and delays. The line that these people are standing in was going to the United Airlines customer service center where a person would have the opportunity to try and reschedule their travel plans. I stood in this line earlier for just over an hour to find out that I had to wait two days before I could actually get on another flight to go back to Germany. When I was in the line it was actually much shorter than it is in this picture. My connecting flight arrived late in Chicago so I missed the plane I should have been on to Germany. But upon my arrival I found out that I was not alone in missing a flight and due to some severe weather conditions many, many flights were canceled.
This whole incident was not one that I would like to relive but things like this can and do happen. What I noticed about all of this was how the people involved in this unhappy mess were acting and reacting. Many people were very upset and yelling at anyone from the airlines who was standing still long enough to listen. I had to work my way around a couple of irate people just to be able to speak to someone from United Airlines and find out what my options were after missing my flight. I will have to say that everyone I talked with from United were very helpful and since they did not cause the tornadoes that caused my flight delay I was not mad at any of them, but that could not be said for everyone in the airport that day.

For me this whole incident was a lesson in actions and reactions. In any negative situation we can either react to the problem and be upset and take it out on whoever or whatever happens to be around us or we can see what has to be done to solve the problem and take the appropriate action. Although I was not happy about missing my flight back to Germany I realized that if I yelled at the United Airlines people that they would be less likely to even want to help me. Besides that, my being upset would not do anything to first of all change the weather (or what had already happened) and second of all it would not make me or anyone else happy. So my thought for this whole thing is that it is better to take a moment to look at a situation and find out the proper course of action instead of reacting to the problem and possibly making it even worse. Sooner or later in life we will all face a problem and how we act or react will make a big difference, for us and everyone around us.
Posted by Jim at 11:15 PM No comments:

For over two years now I have had a blog site. This blog site is actually my second, the first one I was using crashed. Then, to make things worse, the company running the site did not have things in place to back up the site and restore everything so I moved on to a new site. Just the other day I was looking at my blog site and I decided to make some minor changes to the way the site looks. That got me thinking about some other related things.

Throughout our lives we are making changes. In fact, the only thing that does not change is that things change! Most people are like me where the things that are familiar are what we like best and we don't always want to make the changes and adjustments that we should. Recently I have been looking at some things in my own life and making some changes. Nothing radical, just some small adjustments that I believe will make things better for me.

My belief is that since none of us are prefect we need to be ready and willing to make changes when we find an area of our life that needs it. As a Christian and a minister I want to follow God's plan and purpose in my life and that sometimes leads to a change or two. What I have found is that there are times I resist the change from something familiar to something new, but when I make the changes that God leads me into it always pays off! Keep an eye on your life, and keep your spiritual ears tuned in to God and be ready to make any necessary changes; it will always be worth it.
Posted by Jim at 9:30 PM 1 comment: