Everyone likes to see themselves in photos, but there is one kind of camera here in Germany that you do not want to take your picture. In Germany there are traffic cameras placed in different locations to catch people who violate the traffic laws and these cameras take their picture to prove it; here is a photo of one of those cameras. The camera is on the right hand side of the picture by the tree. 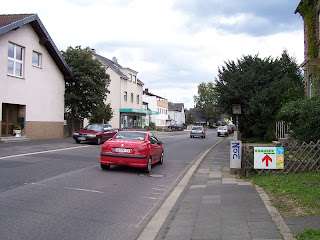 These cameras are placed along the roadside to catch speeders and they are also located at some intersections to catch anyone who may run through a red light. I have seen the pictures that these cameras produce but I am glad to say I have never had my picture taken by one of them. In German these cameras are called "Blitzers" because of the flash of light that the camera makes when it takes the picture; the word Blitz in German means lightning or a flash of light. If you are caught by one of these cameras what will happen is that you will receive a letter in the mail with your picture from the traffic camera and the amount of your fine.

The one thing that does seem a bit odd to me about these cameras is that they are usually set up in one place and they stay there. There is a portable version of this type of camera that you can see being set up in different places from time to time to catch people. However, because most of these cameras are in a fixed place, people will drive over the speed limit until they get close to the camera and then they slow down. That seems to me like it defeats the purpose because once people know where the cameras are they watch out for them. I suppose the best thing to do is just to be careful how you drive since not every road in Germany is a part of the Autobahn!
Posted by Jim at 8:00 PM