Last week I had the opportunity to be a part of something very special in the life of a child, their first day of school. In Germany, like the USA, children attend Kindergarten but the big step comes when they enter the first grade. Here below are a couple of pictures of Silas, who happens to be my godson, ready for his first day of school. 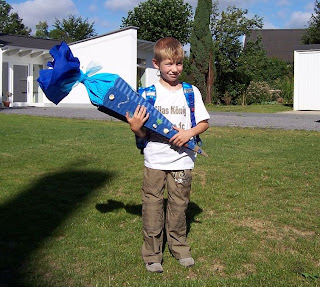 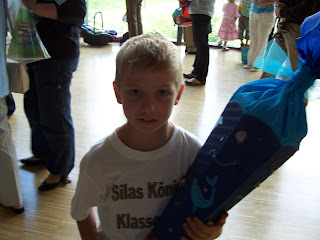 The first thing that you may notice is that he is holding this blue thing that looks like some giant ice cream cone, this is called a "Schultüte", which literally means "school cone". The Schultüte is filled with things a child will need for school like pens and pencils and it also contains candy. That seems like a pretty good deal to me as I don't seem to recall getting any candy on my first day of school!

The first day of school for Silas was quite an event. First I accompanied Silas and his family to a brief ceremony in the church in the small town where he lives. After this church ceremony all of the children walked to another building for a sort of get acquainted with the school meeting. This meeting was a big production with a lot of things happening. 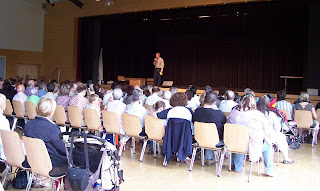 Once the meeting got started the person who is what we would call the dean of the school greeted the students and their parents. He then acted as a sort of MC to introduce the different classes of the current 2nd through 4th graders in the school who all had some song or sketch to perform for the new students. This picture to the left is of the dean addressing the new students and their parents. 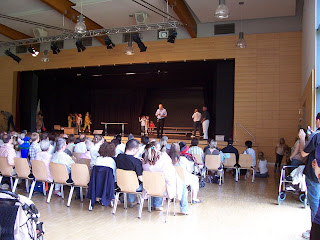 Part way through this meeting a couple of other people were introduced, they were from the mayor's office. The mayor himself could not be there because he was sick. The representatives of the mayor also addressed the students and their parents. Then they gave the dean of the school a bottle of wine to congratulate him on his fine work or some such thing. Since the whole thing was in German I missed a word or two but I figured that the wine was either a gift to congratulate him on something or they figured it was going to be a pretty tough year for him. What ever it was it was something that you probably would not see in the states but it is not a big deal here in Germany. Once this meeting was finished the children then went to their classes.

German children all attend the same basic school from grades 1-4. After grade 4 they will go to a different school based on the type of vocation they will pursue. Since I would not say I am an expert on the German school system if you are interested in finding out more about how the education system in Germany works you can take a look at http://www.howtogermany.com/pages/germanschools.html for more information.

The first day of school is a big event for the children and their parents. I am glad to have been a part of this special day for my godson and I am sure that he will do very well in school.
Posted by Jim at 5:10 PM